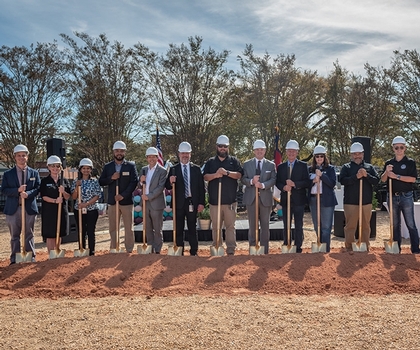 November 7, 2022 – CSX leaders recently joined North Carolina and local government officials to kick off a project that will increase capacity and enhance safety on the CSX Monroe subdivision.

The project at Waxhaw, N.C., is one of several planned improvements to the corridor, which is an important link in CSX’s National Gateway intermodal network that moves containerized freight efficiently from East Coast ports to inland markets.

The Waxhaw project will extend a passing siding by 2,500 feet and eliminate two grade crossings through the construction of a highway bridge over CSX tracks and other roadway improvements. The extended passing siding will support the efficient movement of trains, while the grade separation will eliminate the potential for crossing accidents and reduce traffic congestion for the area’s motorists.

Officials from the North Carolina Department of Transportation and Union County were joined by CSX representatives at the recent groundbreaking ceremony to celebrate the official start of the Waxhaw project.