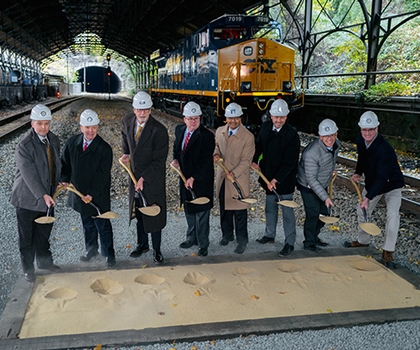 A groundbreaking moment at the Howard Street Tunnel in Baltimore — taking place nearly 130 years since the rail tunnel opened — has launched the final phase of a CSX modernization initiative that will result in 100 percent of the company’s intermodal network being cleared for double-stack train service.

Federal, state, local and port officials joined CSX executives Nov. 29 at Mount Royal Station, just outside the entrance to the historic Howard Street Tunnel, to announce that work will begin in 2022 on $466 million worth of improvements that will enlarge the tunnel and clear obstructions at 22 other locations between Baltimore and Philadelphia.

“At a time when our nation is looking for solutions to both climate change and supply chain issues, we are breaking ground today on part of that solution,” said Jim Foote, CSX president and chief executive officer. “The Howard Street Tunnel project will modernize our rail infrastructure in this key corridor and help improve freight transportation, increase freight rail capacity and further intermodal connectivity between the markets we serve. It will enhance rail’s competitiveness with trucks, providing customers with a sustainable alternative and remove more traffic from the highways.”

Foote also praised the cooperation that enabled the project to move forward. “Collaboration between state, port and federal partners has made this project possible, and we are all looking forward to the day when we send the first double-stacked train through the Howard Street Tunnel and write the next chapter in CSX’s long history here in Baltimore,” he said.

Completion of the clearance initiative, projected for 2025, will mark a major milestone for intermodal rail service in the Interstate 95 transportation corridor and from the Port of Baltimore to Midwest markets. Several shipping companies have announced new service to Baltimore in anticipation of the tunnel project completion, Seagirt Marine Terminal operator Ports America Chesapeake is constructing a second 50-foot berth, and the port has invested in new cranes.

In addition to increasing containerized freight capacity, the project will improve supply chain efficiency for shippers, reduce highway congestion for communities, and deliver environmental benefits from increased use of rail, which is far more fuel efficient than trucks.

The project is being funded with CSX capital and grants from the U.S. Federal Railroad Administration, the states of Maryland and Pennsylvania, and the City of Baltimore. It is one of the largest public-private construction partnerships in Maryland history.

The significance of the project was underscored by the attendance of Maryland Gov. Larry Hogan, Baltimore Mayor Brandon Scott and other government officials.

Built in the 1890s by the Baltimore & Ohio Railroad, a CSX predecessor and the nation’s first common carrier railroad, the Howard Street Tunnel has long been regarded as a limiting factor to growth at the Port of Baltimore. The tunnel runs 1.7 miles under the City of Baltimore with a current clearance that is 18 inches short of what is needed to accommodate double stack intermodal containers.

In addition to the tunnel project, this final phase of CSX’s initiative to clear its entire intermodal network for double-stack trains will include 10 projects in Baltimore, 10 in Philadelphia and two in Delaware.

Construction will begin in the first quarter of 2022 and continue over the next three years. Modern construction methods and carefully planned schedules will be used to promote safety and enable work to be performed without delaying rail traffic through the corridor.