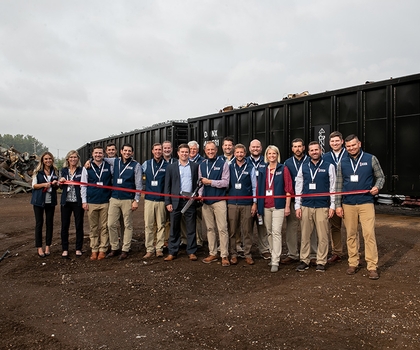 A new rail terminal completed by Beacon Recycling in partnership with CSX and the Michigan Department of Transportation has helped the recycling company strengthen its operations.

Begun in 2013 with the acquisition and development of five industrial properties totaling nearly 15 acres in Grand Rapids, the project has included construction of a new CSX-served rail terminal, as well as expansion of Beacon’s existing recycling facility and the addition of a new fleet of private railcars.

Calling the company’s investment “a long-term commitment to our valued recycling partners,” Steve Bolhuis Jr., vice president of Beacon Recycling, said CSX’s cooperation was crucial to the success of the project. “CSX is a world-class organization and has been a great partner through the development and construction, and is now part of our daily operation,” he said.

Charles Roots, CSX senior regional sales manager, credited the success of the project to Beacon’s commitment to expanding recycling services as an important contributor to environmental stewardship. Beacon is a family-owned business based in Muskegon, Mich., with operations in Traverse City, Mich., in addition to Grand Rapids and Muskegon.

“Beacon is a great customer with a clear vision for growth and for leveraging the safety, efficiency and reliability of rail to achieve its goals,” Charles said. “The contributions of CSX’s cross-functional team, which worked closely with Beacon throughout the development, were instrumental to the success of the project that has already far exceeded expectations.”