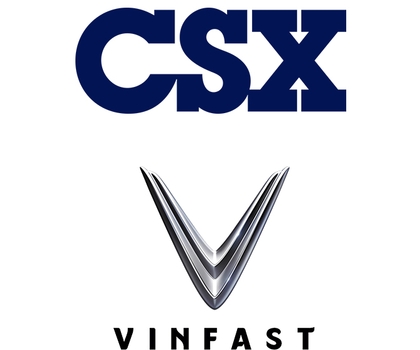 A subsidiary of the Vietnamese conglomerate Vingroup, VinFast has announced plans to develop a $4 billion manufacturing complex that will create nearly 7,500 new jobs at the TIP megasite just south of Raleigh. This will be North Carolina’s first car plant and it is the largest economic development announcement in the state’s history. Construction is scheduled to begin this year on phase one of the project, which will cover nearly 2,000 acres and include three main areas: EV production and assembly, EV battery production, and ancillary industries for suppliers. The company expects to produce 150,000 EV sport utility vehicles per year at the completion of phase one.

The VinFast site is served exclusively by CSX, which worked with state and local officials to market the site and is participating in rail infrastructure design and development to serve the complex. A new autoramp facility for vehicle loading is being built with the support of a $1 million investment by the North Carolina Railroad Company, owned by the state of North Carolina.

“The VinFast project is the third major electric vehicle assembly center to be announced on CSX in the past six months, which speaks to customers’ recognition of the strategic advantages of rail in providing safe, efficient and cost-effective service,” said Kevin Boone, executive vice president, Sales and Marketing. “We’re proud to add the environmental advantages of rail to the supply chain infrastructure that’s serving the rapidly developing EV market.”