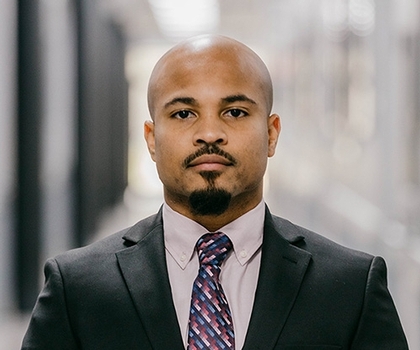 When LaVoy Golden joined CSX as a conductor in Georgia 10 years ago, he quickly established himself as someone with a passion for safety and a hunger for learning. Within two years, he became a trainmaster; in 2016 he was named operations manager at Fairburn Intermodal Terminal in Atlanta; and he’s currently regional manager for CSX TDSI automotive distribution facilities.

Given LaVoy’s trajectory as a leader, it’s little wonder that he was recently named one of Railway Age magazine’s 2022 “Fast Trackers,” a list of 25 North American railroaders under age 40 who are making a significant impact at their companies and in the industry.

Among his accomplishments at CSX, LaVoy was a key figure in setting up operations at the upgraded and expanded Fairburn terminal, one of the most advanced intermodal facilities in the nation, and he was instrumental in projects that have delivered more than $200 million in productivity. He also helped develop and roll out a new electronic inspection report process that has saved millions of dollars through equipment readiness at CSX intermodal and automotive facilities.

Just as impressive as his professional accomplishments has been LaVoy’s success in earning a reputation as an effective people manager and outstanding team builder. His colleagues’ respect for him was evident in their comments nominating him for the CSX Professionalism Award he won in 2019. He also is an active member of the CSX African-American Inclusion Group and he gives back to the community through donations to the Randiance Project that provides school supplies to low income families in Memphis, Tenn.

LaVoy holds a bachelor’s degree in project management from Columbia Southern University, and he’s looking forward to being a strong contributor to CSX’s success for many years to come.

To learn more about the Railway Age 25 Under 40, click here.