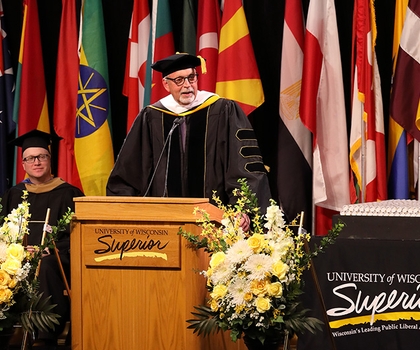 CSX President and Chief Executive Officer Jim Foote recently returned to the university where he earned his undergraduate degree to receive an honorary doctorate and deliver the commencement address to 2022 graduates.

The event, held Saturday, May 14, was a special homecoming for Jim, not only to the University of Wisconsin-Superior, where he graduated with a bachelor’s degree in political science and communication in 1978, but also to his hometown and the place he began his railroad career.

Jim was born in Superior and followed in the footsteps of his father and grandfather, who both worked for the railroad. At age 18, Jim landed a job repairing locomotives on the Soo Line Railroad at night while attending classes at UW-Superior during the day.

After graduating from UW-Superior, he moved to Chicago, where he continued his education — and his railroad career. He attended John Marshall Law School at night and worked for the Chicago and North Western railroad during the day.

“I’ve been back to my hometown many times over the years, but this visit was special,” Jim said. “It was a chance to reflect on my life journey and express my gratitude for the education I received at UW-Superior. It was also an honor to stand before the 2022 graduating class and encourage them to fearlessly embrace the next phase of their own journey.”