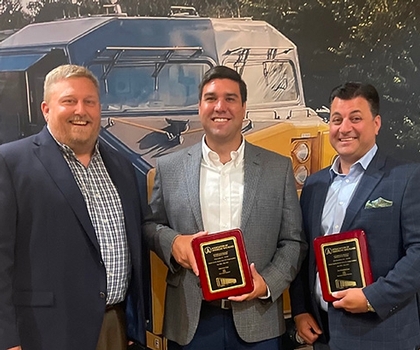 For the second year in a row, the Total Distribution Services Inc. (TDSI) Palm Center terminal at Jupiter, Florida, has won recognition as the highest-quality automotive transload destination in North America, but this year it had company — the TDSI East Brookfield auto ramp in Massachusetts.

The two facilities owned by the CSX subsidiary TDSI shared the 2022 Association of American Railroads (AAR) Highest Quality Review Score for Destination Facilities by both earning a score of 99.98%.

“This is the first time a railroad has had two terminals tie for the top score,” said Maryclare Kenney, CSX vice president of Intermodal and Automotive. “It’s testament to the pride and professionalism of TDSI employees that they have established the Palm Center and East Brookfield terminals as the best in the industry.”

AAR evaluated more than 180 terminals throughout the United States, Canada and Mexico through unannounced audits. The Palm Center facility matched its 99.98% score from the previous year, while East Brookfield elevated its already-strong performance to pull even with its sister terminal and win the top-destination recognition for the second time, the first coming in 2015.

Overseen by Mike Pascuzzi, regional operations manager, the East Brookfield TDSI terminal is 65-acre facility with 80 rail car spots and capacity for 5,200 automobiles. The facility is operated by the East Brookfield and Spencer Railroad (EBSR), a CSX short line partner, and the unloading contractor is Northeast Vehicle Services (NVS).

“Flawless execution from EBSR and NVS stems from a culture based on strong leadership and an unrelenting commitment to quality in everything they do,” Mike said. “I look forward to celebrating this success with George Bell, owner of EBSR; Kory Bryant, general manager; and Nathan Roberts, terminal manager, who have performed at the highest level for CSX and TDSI.”

The Palm Center TDSI terminal is a 55-acre facility with a 100-rail car receiving/departure yard, 32 rail car spots and capacity for 3,800 automobiles. The facility operator and unloading contractor is Inter-Rail Transport.

“I could not be prouder of Inter-Rail and the Palm Center terminal team,” said Mike Herman, TDSI regional operations manager. “I consider them to be best in the industry. They continually strive for excellence, providing consistency in safety and quality every day. I look forward to recognizing and celebrating the team’s success.”

The Palm Center and East Brookfield teams received their awards at the AAR Damage Prevention and Freight Claim Conference on June 13.