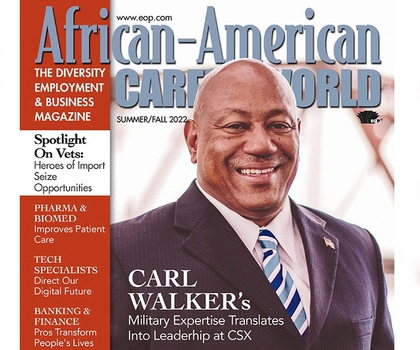 There’s a familiar face on the cover of the latest edition of African-American Career World Magazine (AACWM): CSX’s Carl Walker.

A railroad veteran of 23 years, Carl is featured in the summer/fall issue of AACWM, which highlights his contributions as assistant vice president of Communications, Signals and Positive Train Control at CSX, as well as his military service as a U.S. Navy officer before joining the railroad.

Carl’s story is part of a “spotlight on veterans” special report under the headline “Heroes of Import.” In addition to featuring Carl’s individual journey from the military to a successful civilian career, the article cites CSX among the prominent corporations and businesses to which the public shows appreciation for “recognizing the value of military service.”

“CSX creates a workplace culture that makes transitioning from military service to railroad service a natural change at every level from entry to executive management,” Carl says in the article, which notes that nearly one in five CSX employees has served in the military in some capacity.

“I regard my background in the military as a significant factor in preparing me for the many positions I have held throughout my career,” Carl says. “The experience I gained on the railroad, coupled with my military service, allowed me to develop important leadership skills that help my guide others as an organizational leader.”

The article further cites Carl’s role in supporting diversity at CSX as executive sponsor of the African-American Business Resource Group.