CSX Leads All Transportation Companies on Newsweek's 'Most Responsible' List 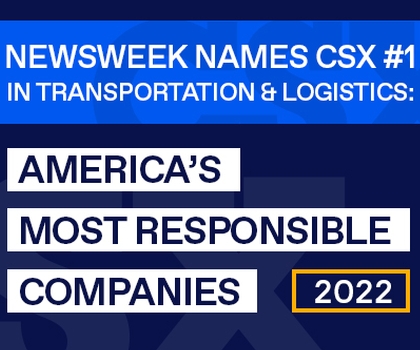 CSX is the most responsible transportation and logistics company in America and among the nation’s top 100 companies overall, according to Newsweek magazine’s 2022 corporate citizenship ranking.

Newsweek’s third annual list of America’s Most Responsible Companies ranks CSX first among the 14 transportation and logistics companies to make the list and 73rd among all of the 500 public corporations recognized for demonstrating high standards of environmental and social responsibility.

The companies on the list represent the full diversity of the U.S. economy, but they “all share a set of values and we are proud to recognize them,” wrote Nancy Cooper, Newsweek’s global editor in chief, in introducing the list.

Starting with the nation’s 2,000 largest public corporations by revenue, the magazine performed a detailed analysis of publicly available environmental, social and corporate governance data. It also conducted a survey of 11,000 Americans about their perceptions of the companies as corporate citizens.

With 100 being the highest score in each of the three categories, CSX scored above 80 in all three, for an overall score of 83.6. The second-ranked transportation and logistics company, FedEx, appeared at number 125 on the list.

“CSX believes that operating responsibly and respecting communities and the environment are essential to succeeding as a business as well as a corporate citizen,” said Bryan Tucker, Vice President of Corporate Communications. “We are proud to be recognized by Newsweek for our efforts and to lead by example in our industry.”