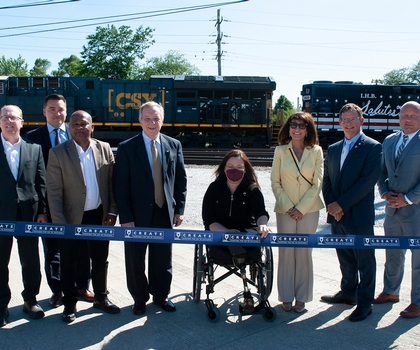 With one major project complete and another underway, CSX demonstrated its commitment to investing in Chicago’s rail infrastructure at recent back-to-back events with elected officials and industry partners.

On June 17, national, state and local leaders joined members of the Chicago Region Environmental and Transportation Efficiency (CREATE) Program to celebrate the completion of a new double track connection and crossovers that will help improve freight and passenger rail traffic flow on the complex Chicago network.

Just four days later, on June 21, CSX held a groundbreaking ceremony to announce the construction of a new $25 million intermodal container storage yard at 63rd Street, adjacent to the CSX 59th Street intermodal terminal. The new facility will enhance service to intermodal customers throughout the region and beyond.

The CREATE Argo Connections (B9) Project was the 32nd to be completed out of the 70 projects that are part of the regional initiative. The improvements will greatly reduce train-meet congestion between the Belt Railway Company of Chicago and Indiana Harbor Belt Railroad/CSX line at Archer and 63rd Street. Additional crossovers were also added to the control point at 71st Street. The project connects the CREATE Beltway and East-West corridors and upgrades mainline crossovers to accommodate higher speeds from 10 mph to 25 mph, reducing congestion and minimizing freight and passenger train conflicts.

“The CREATE Program is modernizing Chicago’s rail system to better handle our nation’s freight and passenger needs, both today and in the future,” said Edward Steinbeck, general manager of CSX’s Midwest Region. “This project advances our shared goal to eliminate the most congested rail chokepoints in Chicago, further improving our nation’s supply chain infrastructure and increasing train speed in North America’s most important railroad hub.”

The project earned accolades from a large number of national, state and local officials who attended the event. Among those who spoke were U.S. Sens. Dick Durbin and Tammy Duckworth; U.S. Rep. Marie Newman; Omer Osman, Illinois transportation secretary; and Jesse Elam, director of strategic planning for the Cook County Department of Transportation and Highways.

CLICK HERE TO WATCH A VIDEO of the CREATE event.

Expected to open in December, the 63rd Street container storage facility will provide additional options for manufacturers and distributors throughout the region, while supporting the local economy, said Tee Stribling, senior terminal manager at CSX.

“We are investing in Chicago’s Englewood community to transform a former industrial site into a modern container storage facility,” Tee noted. “CSX has been a part of this neighborhood for more than 20 years and we are excited to bring more jobs and business opportunities to local residents.”

CSX worked with Chicago Alderman Stephanie Coleman to secure the project for the neighborhood. “One of my highest priorities as Alderman has been championing economic investment in Englewood,” Stephanie said. “We are grateful for the partnership with CSX and its team. I believe this development will have a positive effect and will encourage other private sector entities to consider Englewood for business investment.”

In addition, CSX is creating opportunities for local and minority-owned businesses to work on the project.

CLICK HERE TO WATCH A VIDEO of the 63rd Street Event.